The sect member told Tian Ming if it weren’t for Ge Nie, his Xiang Clan wouldn’t have ended up in this state. Shao Yu and his member soaked Tian Ming in the water forcing him to tell him the truth. Tian Ming complained to DuanMu Rong about Xiang Clan. Xiang Liang and Xiang Bo asked DuanMu Rong if she’s the Divine Physician. Rong showed them her badge. Duan Mu Rong complimented Shao Yu of having the look of a hero. Xiang Lang ordered the servants to tie Tian Ming up while he chats with DuanMu Rong. Tian Ming wants to have a fight with Shao Yu. Tian Ming fought with Shao Yu. Shao Yu stopped him with his sword. Tian Ming thought it was unfair that Shao Yu had a sword. Shao Yu hand over his sword to Tian Ming and asked him to use it. Tian Ming accidentally pushed the sword on Shao Yu. Shao Yu smiled and used the rope to tie Tian Ming’s hands and feet and kicked him.

Xiang Liang asked Rong why did she come with Ge Nie and saved Tian Ming. While Shao Yu leads Rong to the guest room, Rong asked Shao Yu where is Tian Ming. She needs to get the stuff that Tian Ming stole from her. Shao Yu told Rong he doesn’t know where Tian Ming is being locked and he can take her to his uncle to ask for it. Ying Zheng got angry after hearing Ge Nie saved Tian Ming. Tian Ming tries to untie himself in the house. Shao Yu followed Rong. Duamu Rong chopped the lock and ran with Tian Ming and Ge Nie. Shao Yu confronted Rong of knowing where the guest room is. The Qing soldiers surrounded DuanMu Rong. The soldiers was about to chop Tian Ming. Shao Si Ming used water power on the soldiers. Shao Yu fought with the soldiers. Tian Ming piggy back Ge Nie and ran with Rong. 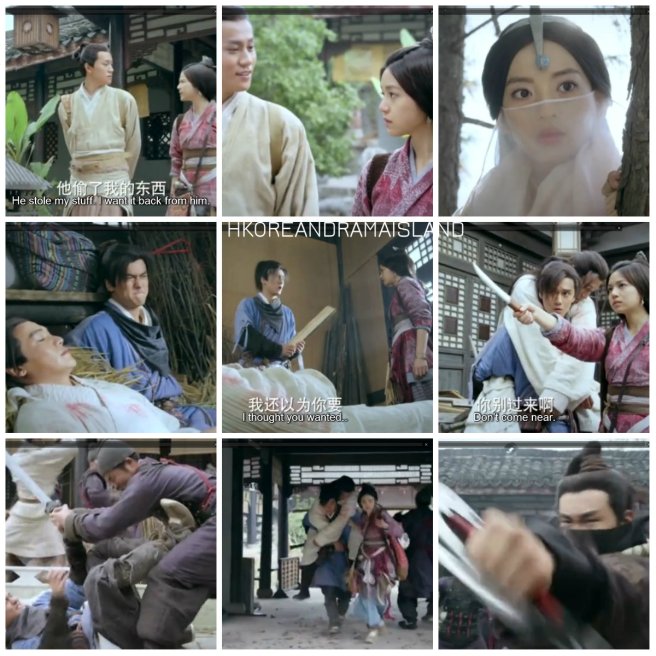 Dong Guo Zhi and some assassins in black suits used their weapons to kill all the soldiers. Dong Guo Zhi asked Rong and the others to follow him. Zhang Liang stood in front of them in the woods. Zhang Liang used his spell to defeat the soldiers. Dong Guo Zhi stared at Rong and find her attractive. Dong Guo Zhi pretends to ache to get Rong. Rong pointed a pin on Dong Guo Zhi’s head to shut him up. Everyone laughed. Zhang Liang greets Xiang Bo, Xiang Liang, Xiang Zhuang, and Shao Yu. Gao Yue greets Tian Ming and his crew on the boat. Tian Ming infatuate stared at Gao Yue. Gao Ye asked Mu Rong abut her leaving for ten days without bidding farewell to her. Dong Guo Zhi requested Gao Yue to exchange seat with him so he can talk to Rong. Tiang Ming helped Gao Yue opened the lantern. The fireflies flew out. Tian Ming and Gao Yue stared at the fireflies. Fireflies flew on Gao Yue and Tian Ming’s nose. Tian Ming picked up the firefly. 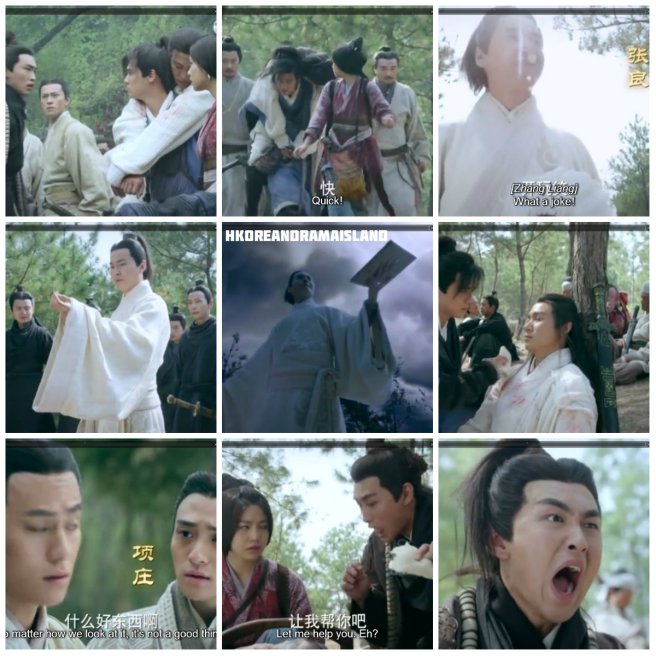 Dong Guo Zhi told Tian Ming that Gao Yue is Rong’s disciple. Ten days ago, Rong found Ge Nie’s location and disappeared. Gao Yue asked him for help and he led the troop. Whiled wandering in the woods, Dong Guo Zhi asked is crew to be careful since Brother Zi Fang has put a spell on the gate. Tian Ming watched Zhang Liang tying up some vines and said he will beg him as his master. Tian Ming saw a spider in his arm and jumped and tries to get rid of it. Tian Ming got freaked out seeing a someone as a ghost. Dong Guo Zhi teased Tian Ming of using a good trick pretending to be a coward. Shao Yu and the crew went in the house. Tian Ming heard a weird noise and saw an illusion of spiders crawling on the skull. Shao Si Ming sent a bird that she’s too incompetent to take care of the situation.

View all posts by jnewin