Someone threw a knife at the immigrants and asked Ruco to get out. Oscar asked Ruco what is his offense. Oscar told Ruco he doesn’t care what he did as long as he didn’t commit sex crime. Ruco took pictures of a camera. Ruco saw his pic being messed up and suspect someone has went to his room. Ruco looked at photos of models on his laptop an idea and told Oscar to be an internet celebrity. Ruco jumped on the other side of the building and went in the room and fought with Nancy. Oscar eavesdrop on Ruco having fun with Nancy then he barged in. Ruco drove Oscar out and asked Nancy who she is. Nancy warned Ruco if he doesn’t want to be kill then stop investigating who killed Auntie Mei. Ruco asked Nancy how much she knows about Auntie Mei’s murder and who killed her. Nancy grabbed Ruco and warned him to be nice to her and she won’t tell him who killed Auntie Mei. Oscar teased Ruco he has an exciting preference. Ruco checked in his laptop and put his face in front of Nancy. Nancy turns on the other camera and watch Ruco. 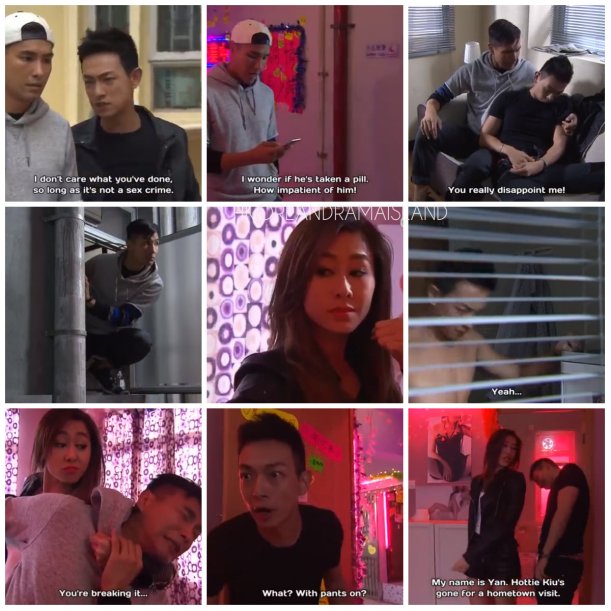 The next morning, Ruco got out of a man’s way in the restaurant and he pushed Ruco toward Nancy’s seat. Nancy tasted Ruco’s noodle and found it so good and grabbed his bowl. Oscar told Ruco that Ling Hung’s group work for Dai Tsat. Stephen Huyhn and Kwok Fung watches Dai Tsat at the conference. Ruco sneaks in and took pictures of Kwok Fung and Dai Tsat. While Dai Tsat is speaking, Miss Ling enters the room. Ruco stared at Miss Ling and found her looking like Auntie Mei. Ruco watches Miss Ling made her speech and left. Kwok Fung asked Miss Ling for dinner. Miss Ling rejected it and ached her hands. Elaine put a coat on her. Ruco saw Miss Ling in the elevator and tried to reach to her but she closes. Miss Ling told Yik she doesn’t want to put Ruco in danger. Dai Tsat complained to Kwok Fung about Miss Ling came in and humiliated him. Kwok Fung and his two sons discuss about letting Dai Tsat do all the work for them. Kwok Fung asked Elaine how is Miss Ling. Elaine told Kwok Fung that Miss Ling is fine and even more excited than her. Elaine told Kwok Fung to not take down Miss Ling. Kwok Fung asked Elaine if she see sees him in a bad light. Elaine kissed her father Kwok Fung. Kwok Fung told Elaine to tell him when she and Joel will get married. 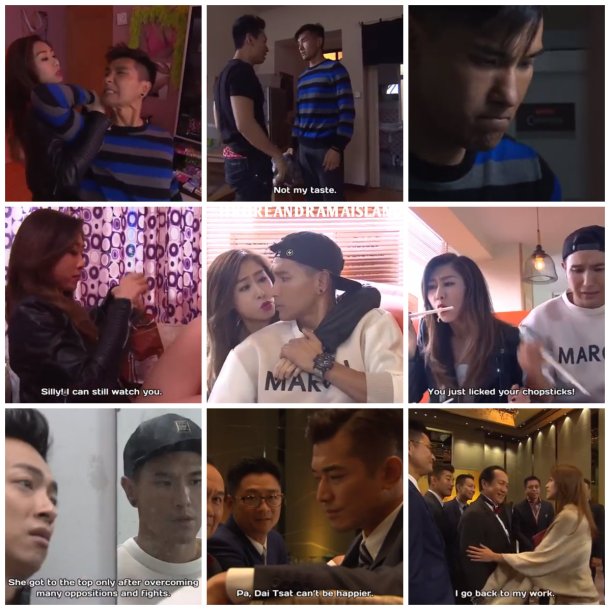 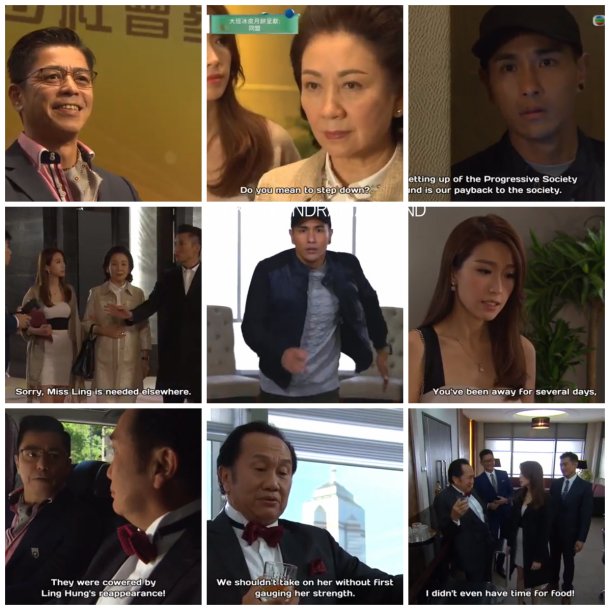 Stephen Wong and Lau Kong came and told Miss Ling he suspects she is related to the gunfight. Miss Ling told Stephen she is busy and can choose not to reveal. Stephen asked Miss Ling if it is private or improper. Ruco followed Joel and Miss Ling’s car. Yik stopped Ruco and shot his wheel and and was about to shoot Ruco. Nancy dragged Ruco in the car. Nancy told Oscar she bumped into Ruco down the stairs. Oscar asked Ruco to give him five hundred dollars that it wasn’t a coincidence. Nancy told Yik that his shot were sharp, she has spycam in Ruco’s house and can check up on him. Miss Ling and Joel discuss how to take Dai Tsat down. Joel and Elaine had a dinner date and rescheduled their meetings with other people. Joel and Elaine kisses each other and made out in the elevator. KK told Miss Ling hat Sunny took their mother to Oldie Golden Concert despite the danger. Dai Tsat plans a shooter to shoot the grandma. Miss Ling told her family to stay home while she go find her mom alone. 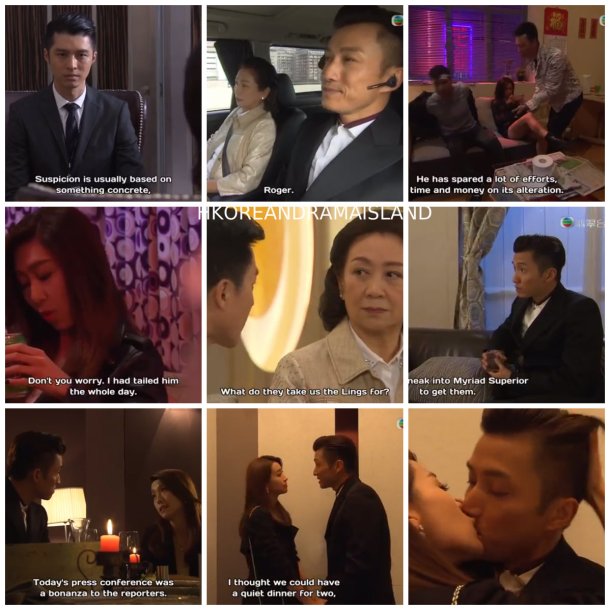 Ruco asked Nancy where is she taking him. He wants to call the police. Nancy told Ruco that it’s no use since the gangster would have cleaned up the scene. The radio said the driver got drunk and left the car. Nancy told Ruco to not trust anyone even the cops. She’s the only one who will protect him. Ruco jumped out of the car and returned to his burnt house and saw photo of auntie Mei and him. The cops told him to put his hands up. Ruco put his hands up and beat up the police. Mrs. Ling stayed in coma. Joel vowed he will investigate the gangster. Ruco showed a piece of paper his aunt left him, to a man. The man showed Ruco a suitcase of money. Ruco looked at some stuff that auntie mei left him. Ruco successfully passed by the airport gate.

Joel told Miss Ling that the gangsters must have been trained. Yik said Joel noticed one man had a viet tiger head tattoo on his hand. Miss Ling said it’s Dai Tsak’s doing. She used to turned down the Viet Tiger Gang. 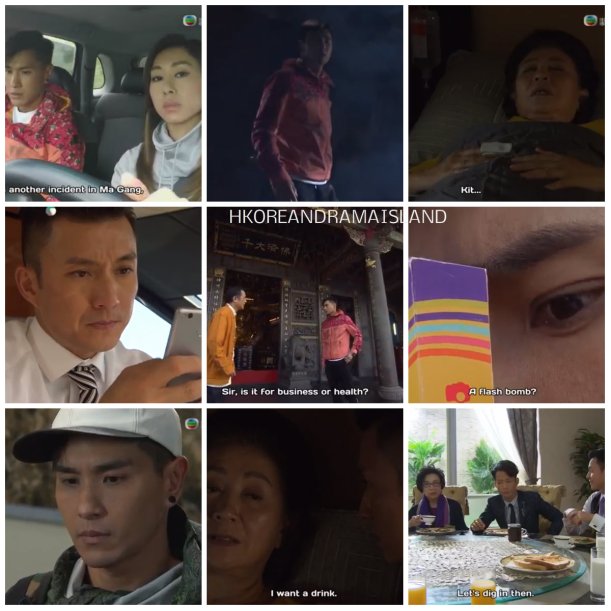 KK ate dinner with his family and haven’t heard news of Miss Ling yet. Elaine came home and asked her uncle and aunt KK and Mary about what should she do when Miss Ling is not at the press conference tomorrow. Elaine and her father and the members discuss who should lead the conference tomorrow. Dai Tsai’s members voted for Dai Tsat to lead the conference. KK and Mary and Ricky meet up with Joel on his office. Elaine asked Joel why didn’t he pick up the phone. Joel kisses and hug Elaine. Elaine told Joel to tell her where he was so she doesn’t have to worry about him. Joel told Elaine that Miss Ling is fine and they know who was behind it but they need her help. 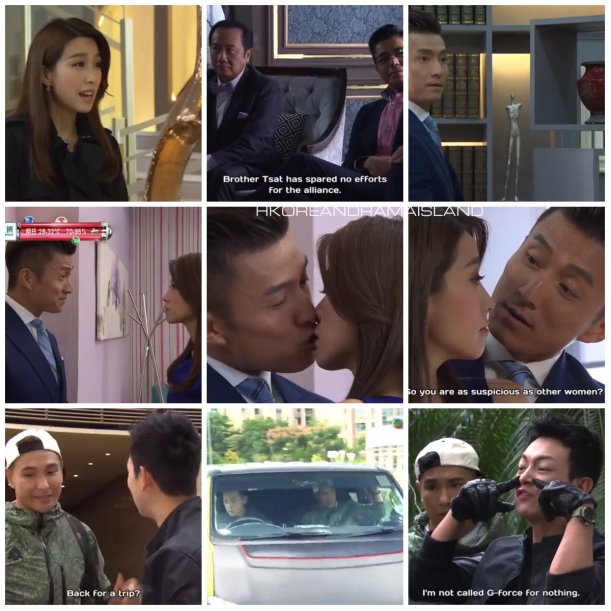 Ruco met his friend Oscar in HK. A car tailgated Ruco and Oscar. Ruco took out his paint gun and shot the tailgater. A man got out of the van and gave Oscar fifteen grand for giving him a ride on the trunk. During lunch, Oscaor called a waitress pretty. The loan shark came and grabbed Oscar. Oscar gave him fifteen grand. The loan shark said that was for last month’s debt. This month’s debt is seventy grand. The loan shark beat up Oscar. Ruco threw a pack of money to the loan shark. Oscar let Ruco stay in his house. Ruco told Oscar to investigate Vietnamese Tiger Gang. Dai Tsat’s men followed Joel’s car but got lost. Oscar brought a Vietnamese guy Shui meeting with Ruco but didn’t find out anything about Vietnamese Tiger Gang. Ruco suspects a Vietnamese food takeaway. Joel beat up a gangster. The Vietnamese takeway shot the gangsters and Ruco saw his tattoo on his arm. Ruco beat up the Vitnamese Takeway. Ruco fainted down the stairs. Joel and his gang beat up the Vietnamese Takeaway. 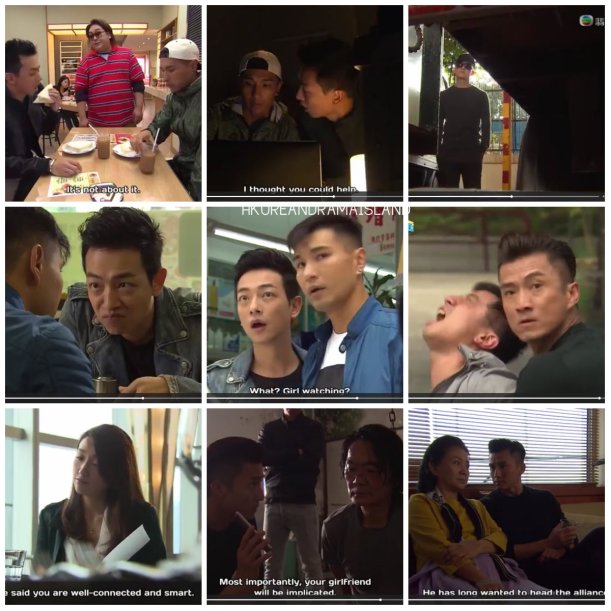 Elaine discuss with DaiTsat about the press conference tomorrow. Joel uses the Vietnamese takeaway’s phone and uses his girlfriend’s Rose Vietnamese password and told him if his boss knew he leaked, he would be dead. Joel told the Vietnamese Takeaway to make a call to Dai Tsi. Dai Tsai put dowwn his phone and told Elaine is an unknown call. Nancy told Miss Ling they lost their target and Ruco went to Hongkong to look for clues. Nancy practices fighting with Yik. Nancy held put a box of pizza and gave one to Yik. Ruco asked someone in the reastaurant about Head Nguyen. Some gangsters came. The police asked them an ID. 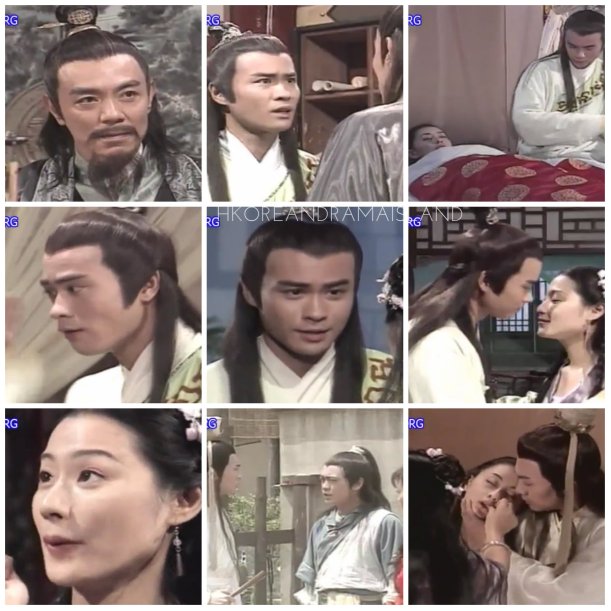 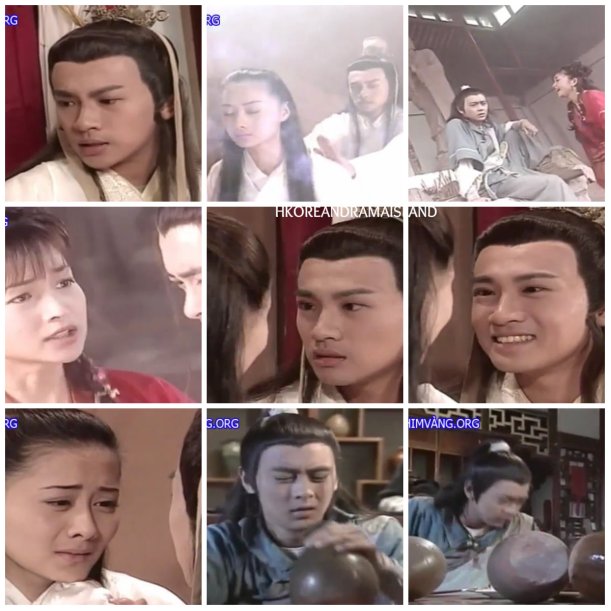 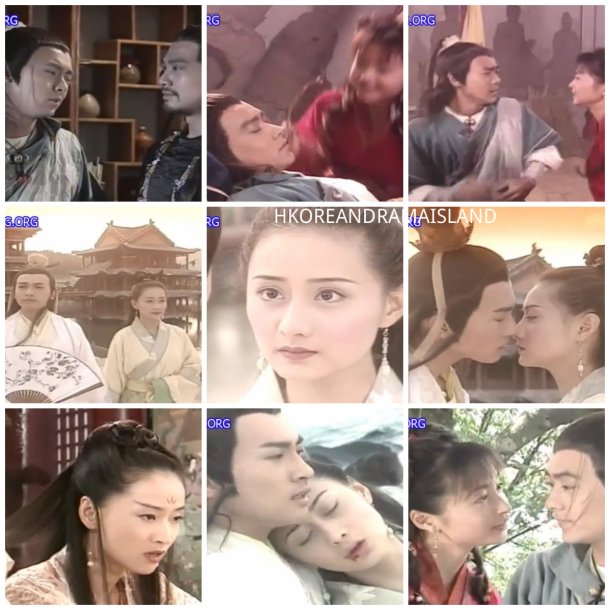 Lian Xing asked Yao Yue if she knows why she loves combing her hair. It is because it is soft and a lot and it is black. When she was a child, she wanted to comb her hair and hoped that her hair would become as beautiful as her. But when she grow up, she realized she can’t be cause she has more hair. Yao Yue understand Lian Xing’s hand has a lot of pain and she has fought for her which is why it got injured. Flashbacks of Yao Yue climbed the tree and tripped and bumped into Lian Xing and Lian Xing hurt her arm. Yao Yue said ever since Yan Nantian left her, she only has hatred in mind. Lian Xing knows Xinlan cares for her and Hua Wu Que. Lian Xing told Yao Yue to let Hua Wu Que be with Xinlan before he has a duel with Xiao You Er. The floral palace already got a good rank and don’t need to rely on Murong palace. Yao Yue said she has to control Hua Wu Que’s fate. 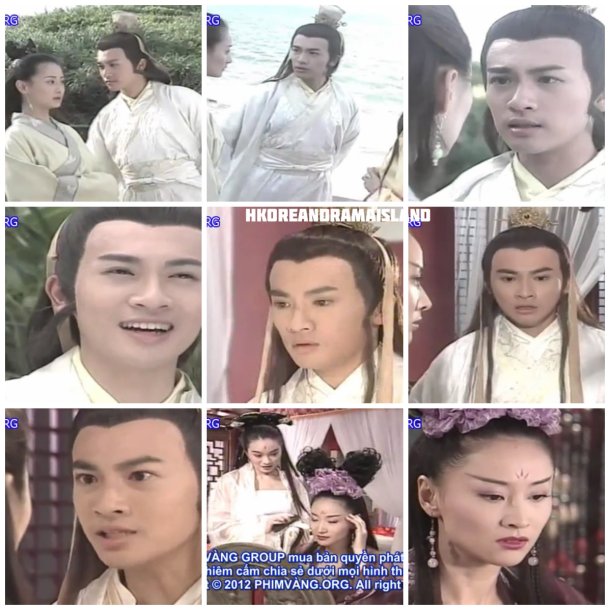 Have a great day you guys!

I had Banh Mi for lunch! 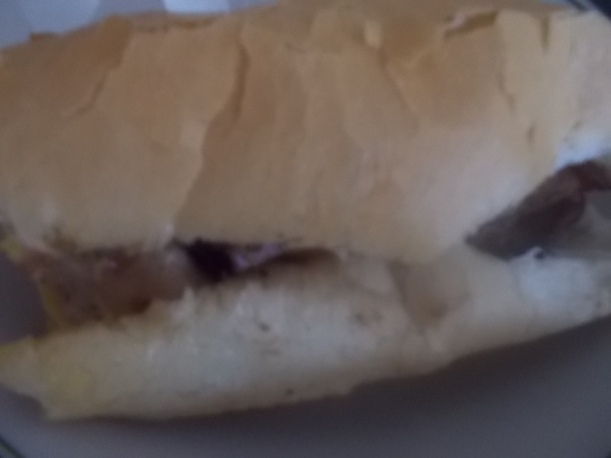 I have cooked Panang Curry for dinner! 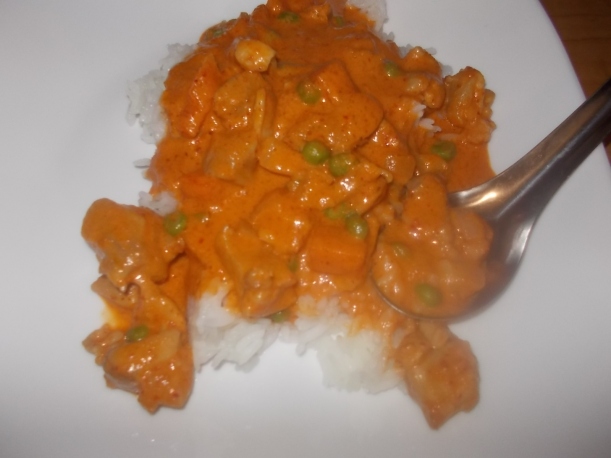 Also Chris Lu from Masterchef tweeted me his photo with FoodNetwork Contestant Charles Chen. Just like how I wanted those two asian chefs to meet and cook together. 🙂 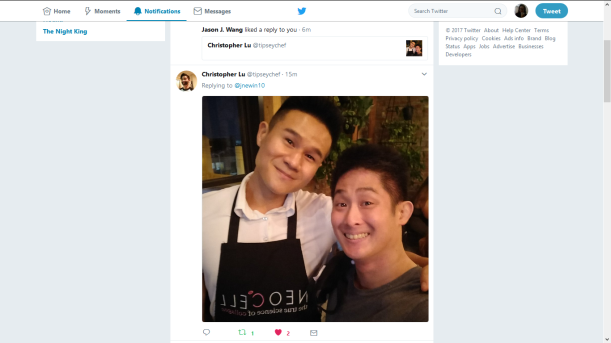 Asian Reddit can be a bit to much for me and crazy though I just lurk. I’ve been just observing as i’m not familiar with politics. Let’s just chill and relax and take a break!

Here’s a song I’ve been onto! It’s an mv of ATV’s Heroine of Yang II.

Enjoy TVB Music for the day!

Where the Legend Begins sub theme

Funday Dining out with a friend in California Pizza Kitchen! As you know I enjoy dining out a lot and I love food. I think it’s the joy of life! 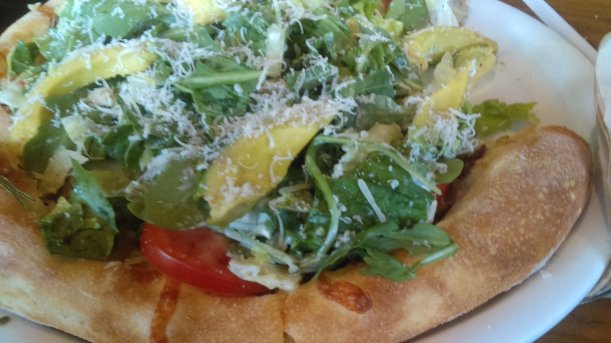 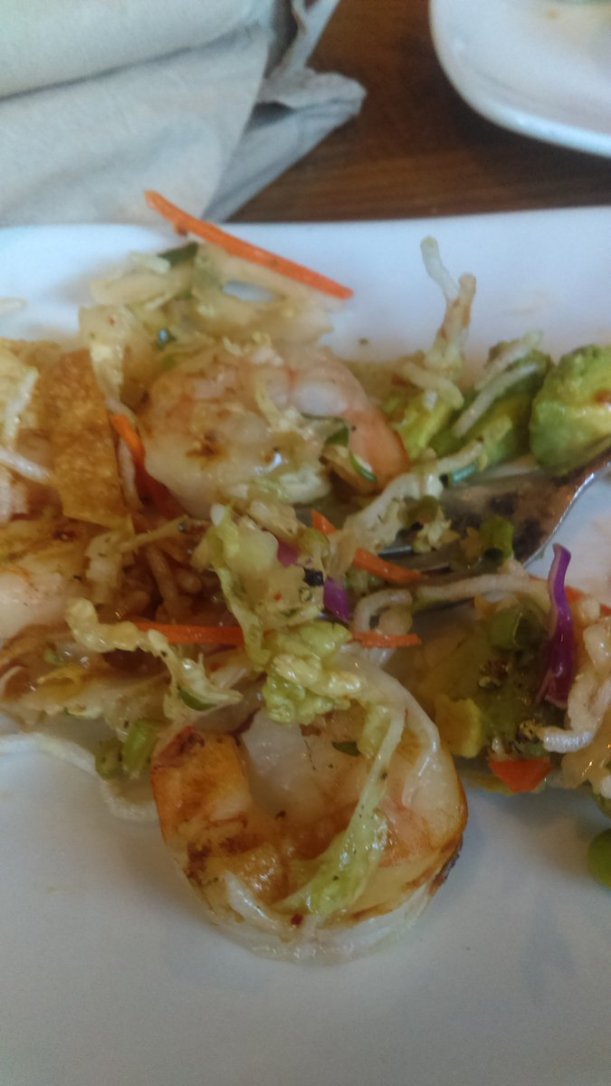 Have a wonderful night everyone!