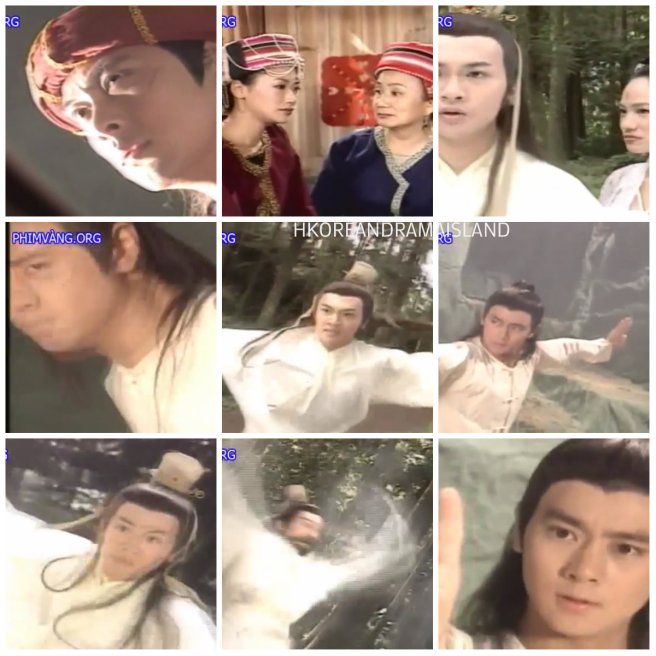 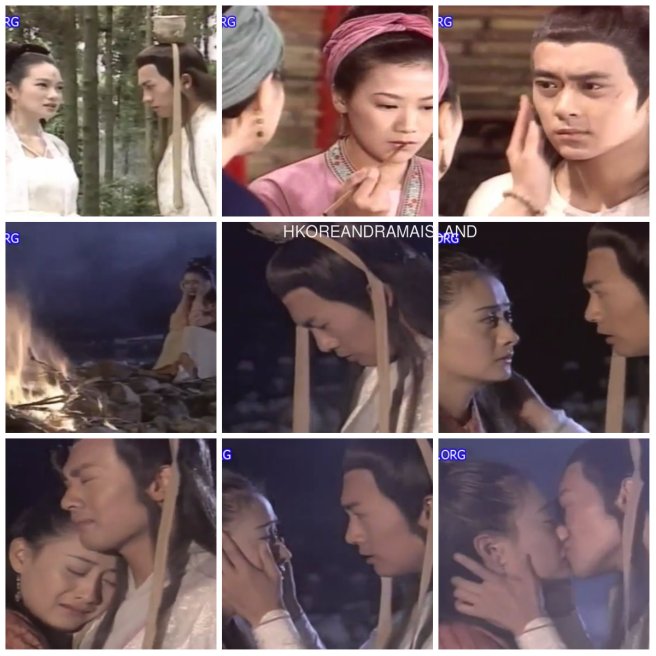 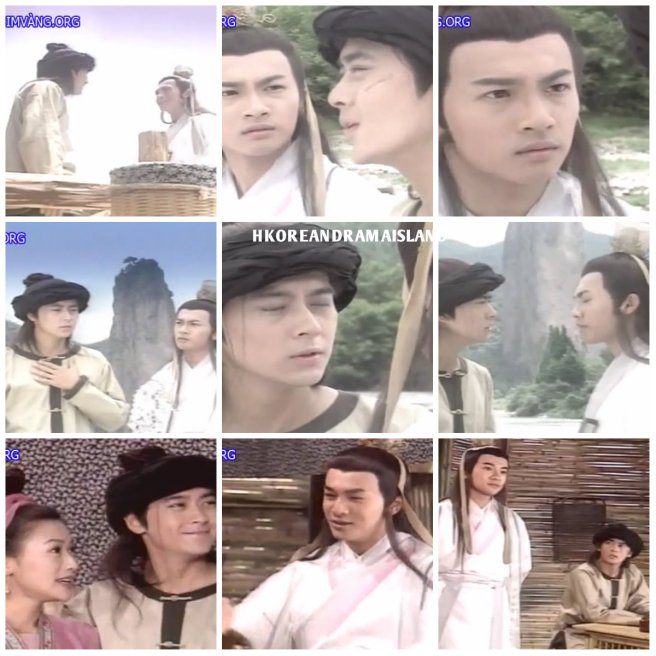 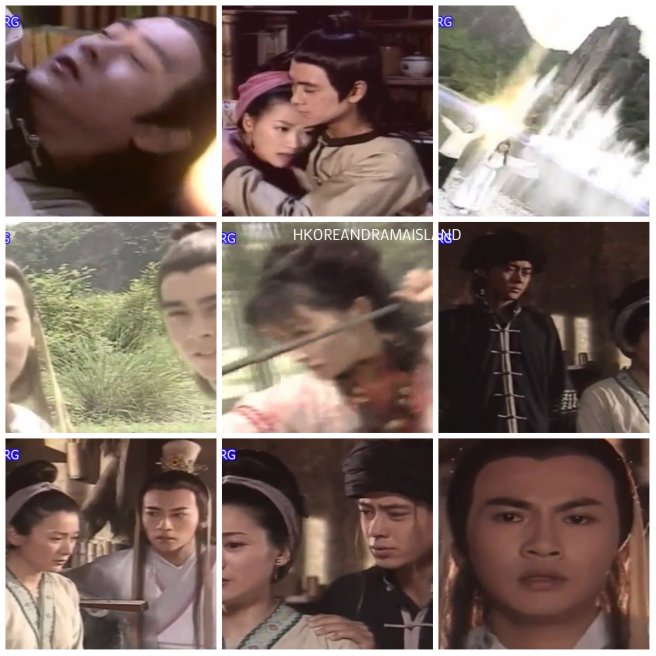 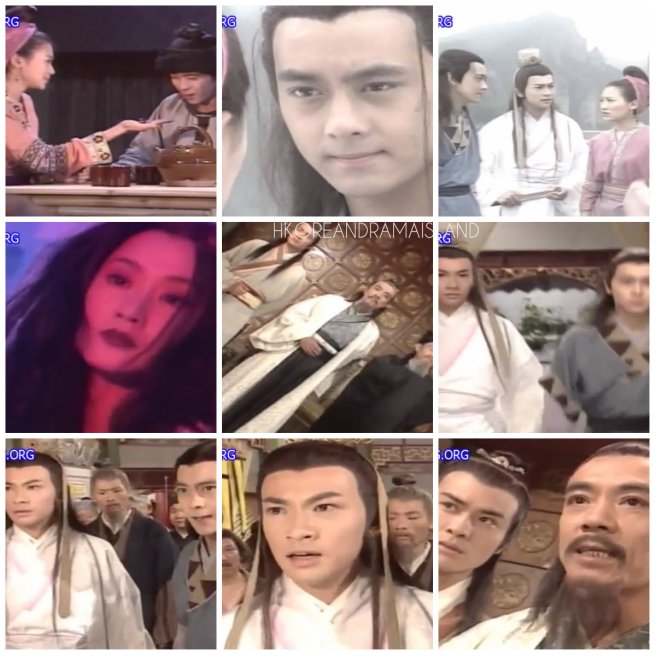 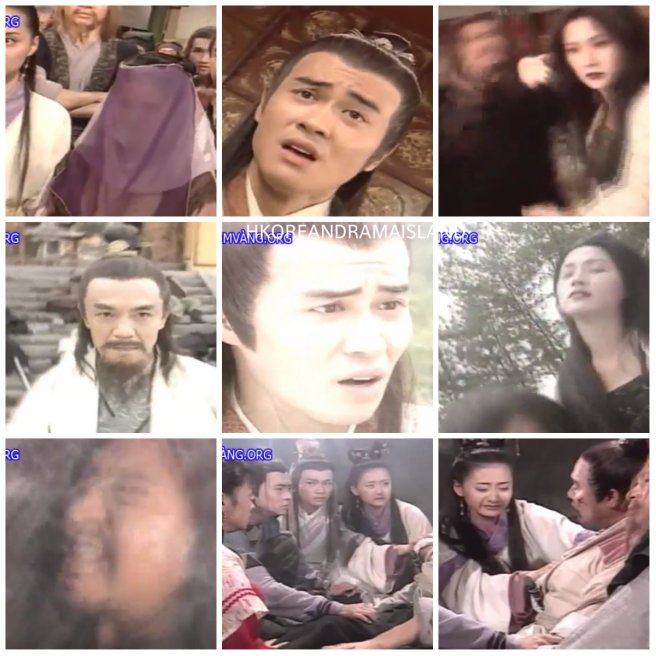 Joel asked Elaine if she has checked her family villa. Elaine said she hasn’t visited there ever since her mother died. Joel suggests to take a tour there and they can stay there for the night as a date. Kwok Fung asked Elaine to hang out with him and their family but she rejected. Ruco looked at his picture of his mother carrying him. Nancy came to his room and took a picture of him. Nancy looked at Ruco’s baby picture. Ruco had a nightmare of Before Auntie Mei dies, she told him she is not Auntie Mei but she is Ling Hung. Ruco drinks some water and heard some shooting. Ruco saw a fingerprint on his laptop. He taped it and glue it and pushed the key button. The door opened. Ruco went down the basement and saw Nancy shooting. Nancy congratulates Ruco of passing his first round. Nancy showed a gun to Ruco and said she’s going to teach him how to shoot. Ruco thought of Auntie Mei and shoots the target. Ruco hugged Nancy happily that he shot two right targets. Joel and Elaine went to the villa and saw Kwok Fung and his family having a barbeque. Elaine told his father that Joel wanted her to have a break so he took her here. 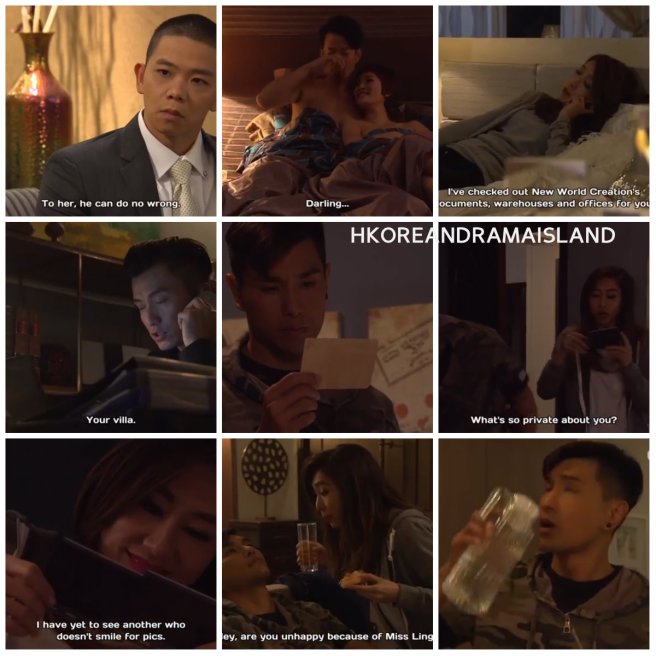 Yik told Miss Ling that Chan Man Fai has a mistress and he would visit several times a month. Miss Ling thinks it’s a trap since he wouldn’t risk his life to visit a girl in this situation. Miss Ling told KK to call Pierre asking where he is. Pierre said he is watching Chan Man Kai visiting his mistress. Miss Ling asked KK if Pierre is seeing Chan Man Fai and she demanded him to tell her where he is. Miss Ling angrily asked them why didn’t they listen to her and Pierre his in danger. Miss Ling told KK to call Pierre to come back right now. KK said Pierre’s phone is turned off. Pierre’s guards got caught by Chan Man Fai and he wants to see Miss Ling. The cops watches Pierre entering Chan Man Fai’s hideout.Yik held Pierre and told him to return home and it’s Miss Ling’s order. Yik shot the gangsters. Yik hid the guns. Stephen arrested Yik. 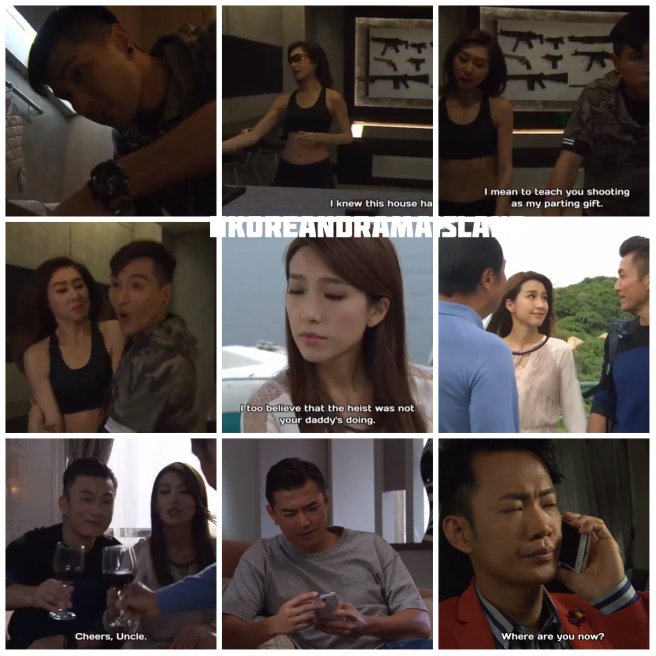 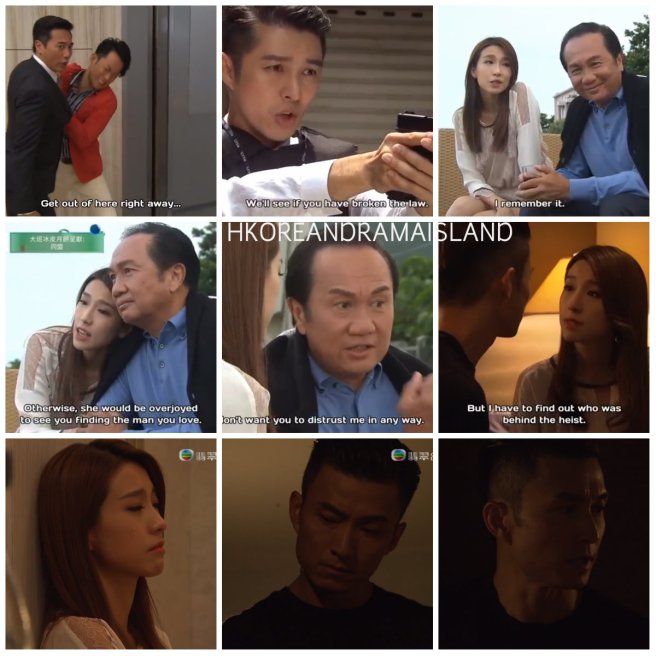 Miss Ling’s family speak up for Pierre. Miss Ling accepts Pierre’s resignation as he says he wants to resign. Yik stays silent at the police station. Yik told Lau Kong that police works by evidence not by scaring others, if they have evidences then charge him. Lau Kong told Yik that Miss Ling is in danger without him. He may have to attend her funeral when he gets released. Yik took down three of Chan Man Fai’s men in prison and looked a the flyer of PHAB. Miss Ling and Mary visited Chloe at her PHAB charity. Nancy took off Ruco’s sunglasses a the airport and told him he doesn’t look blessed. She wishes him luck. Yik called Nancy that Miss Ling is in danger so go to the community center. Nancy sat next to Miss Ling and told her to leave now. Ruco bumped into the gangster and told Miss Ling he has been separated from his mom for thirty years and now he is back he won’t leave. The cops arrived and the gangsters left. 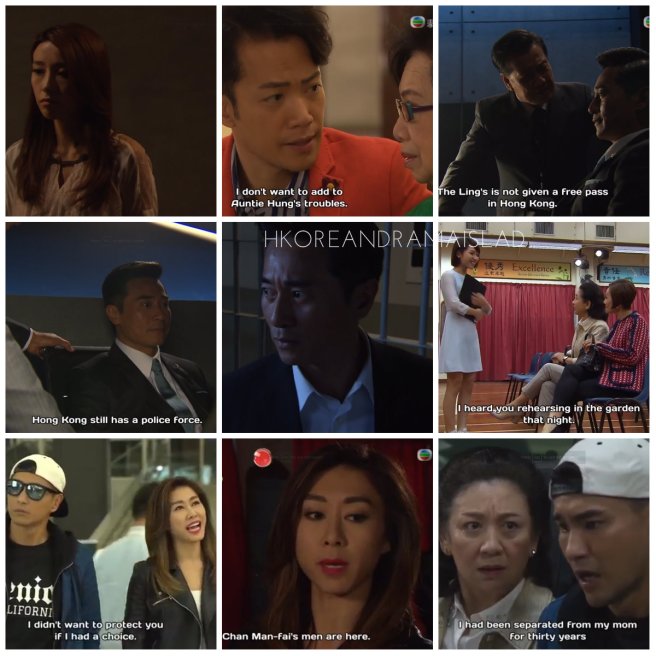 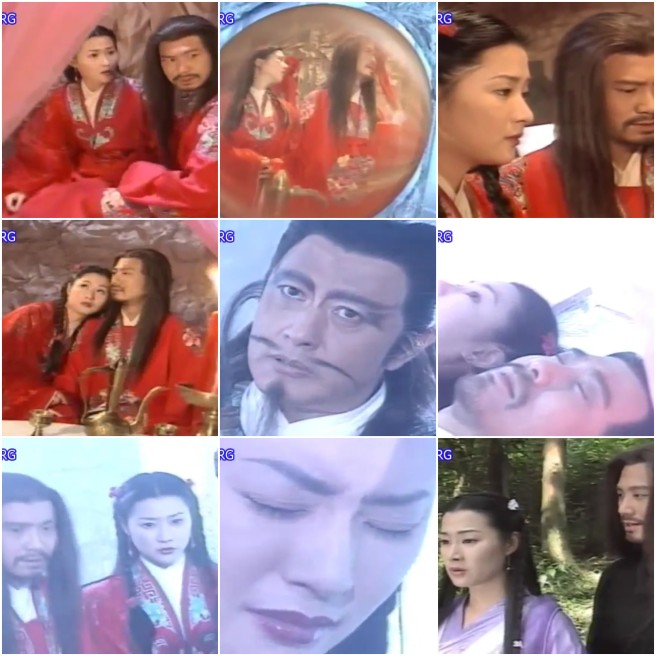 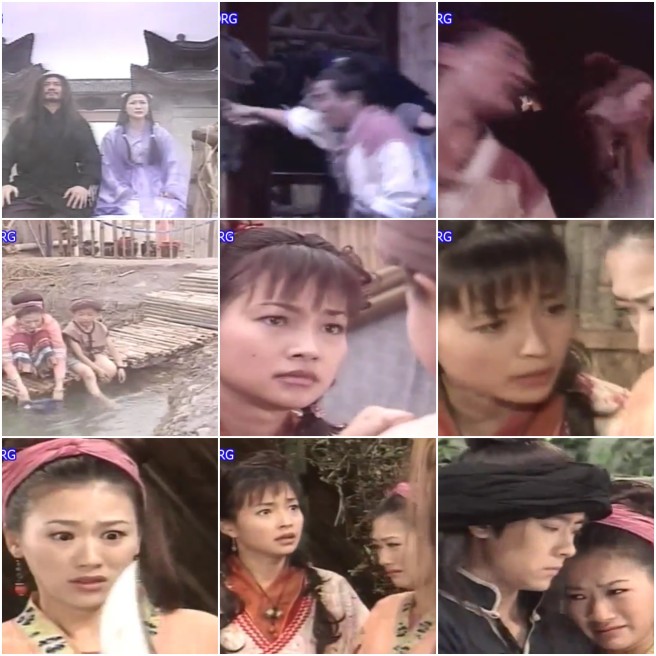 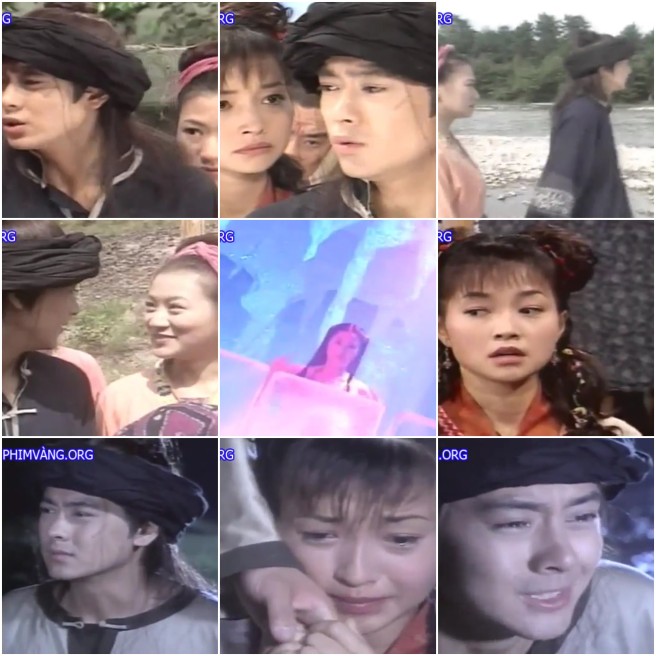 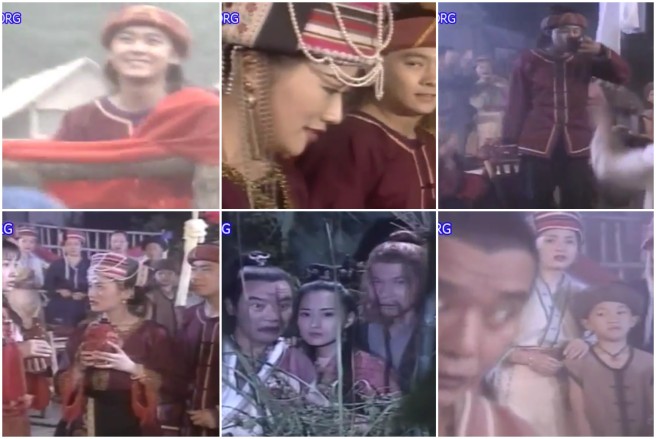 Hi guys! I made a new blog header for myself using photoshop featuring some of my favourite tvb couples in tvb ancient series. Looking at it make my day and gives me good memories of old tvb series!

I was in a good mood so I also made a new blog header for my blogger friend Miriamfanz Casual TVB featuring her favourite tvb historical dramas and characters.

Have a great day!

I need to be careful! In the online word there will be those who supports you but also who despite you! You know what I like being an hk and wuxia blogger and being surrounded by many likedminded asians who also like wuxia and hk dramas. I’ve known a few asian guys who are also wuxia fans who I know from lurking and casual commenting on my blog and I thank them for that. I chat with a lot of fans both from Asian and America!

I’ll keep in mind those quotes NancyZDramaland and A Virtual Voyage cdrama bloggers gave me “Wow be careful out there but stand to your right” and “I don’t know why people love to spread hate”.

I am not really with aznidentity and I don’t have a reddit account but trolls love to stalk me and harass me and getting triggered by me. But you know what some guys and girls thought I was from aznidentity because I always post links. There was a time I felt really scared and I told Cleanslate to not mention my name on the sub despite he gave me a gold medal for asian activism and he is really nice and compliment me too much! Way too much I think! I always say this I like this very upfront personality despite sometimes I don’t agree with his opinions. Oh yeah it was that one time that the guys were beginning to recruiting allies that the guys following me and talk to me one person from the next. I actually sometimes don’t agree with some of the guys opinions but I enjoy supporting them cause they are asians. Yeah I was kinda scared but he told me I have a lot of guys who have my backs.

There will always be trolls who seek to divide asian men and women and love that. My opinion is I don’t like the word “toxic masculinity boys” being used. I think that word can harm asian community and be used against asian men. Also guys from aznidentity have a hard life we should try to understand them instead of labeling them all as toxic. I see some asian females and trolls do that. Oh yeah and I don’t agree with “That’s why they turn to whites”. If you are asian asian woman, and you’ve been bashed by some of the guys from aznidentity, I can’t step on the shoes “That’s why we turn to whites”. It’s just a few asian guys! So I never understood af hate asian men but love white men! Oh yeah I’ve also noticed trolls love to have submissive asian females or girls that are easy to them or they think they are entitled to them. But some asian females are toxic or are mentally ill!

I gotta say that being an asian girl, it was also kinda easy for me to make friends with a lot of asian drama bloggers who are asians because they like to hang out with other asians. As you know I have different kinds of asian followers I know from different places.

I gotta say that I am not so outgoing myself. I am not shy but I don’t talk a lot. As you know I am very careful of who I accept as my online friend. Even in the asian drama blogging world, I am very picky but it’s good I have a lot of asians who are there for me and I enjoy supporting them too. I know a lot of asians from different places, most hk drama bloggers are asians and some asian girls who blog for dramafever also got to know me for being a fan of DramaFever. But lately I got to know more asians from asian activism from aznidentity and also outside of aznidentity.

There’s a few questions other have asked me and thought I was against asianfeminism and interracial dating. Yeah I support AMAF and I like being around other asians but I don’t consider that as racist but maybe that can bother other people.

I shouldn’t write this post but some stuff are hard for me to ignore and I don’t like to justify myself for others nor explaining why I like asian unity!

Yulang asked the girl if she will give him another chance to be with her. The girl asked Xiao You Er what made him change his mind and be wiht her. Xiao You Er said he wants a good wife and live a new life. Ever since he hs fallen from the cliff, he is not Xiao You Er anymore and is starting a new life. Xiao You Er and the girl houted in the well to let them give birth to plenty of kids. 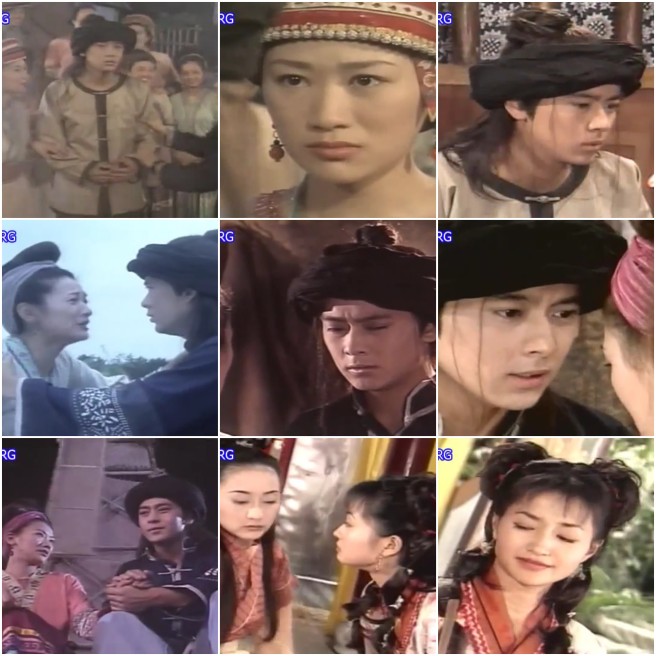 At the temple, Zhang Jing thinks of Xiao You Er. Zhang Jing teased Xinlan and mimick Hua Wu Que that he loves her but he has to go with his two auntie. Xinlan said she’safraid Hua Wu Que won’t see visi her again. Zhang Jing said she wished she could see Xiao You Er before sunset. Xiao You Er came to the temple but pretended not to recognize Zhang Jing. Xiao You Er said Xinlan and Zhang Jing are his wives. The sect memebr took his face mask of Xiao You Er off and said he’s Xiao You Er’s master. THe martial artist told him to pay him his gambling debt he owed him. Xinlan asked the martial artist if he kills the sect member, then who will revege for Xiao You Er. Zhang Jing ordered the martial artist to cook meals for the sect member. Yulang and his father doubt Hua Wu Que saved the priest, and Liang Xing and Yao Yue has restored his martial arts. Yulang took Hua Wu Que’s maid for a walk and said he used to hang out with his mom the day before she left here and he flew his kite which his mom made for him and slept on her lap, then his mom left him because his father abused her. Yulang said he despise his father for hurting his mother. He is afraid his father is going to kill him so he pretended to love him. Yulang said he hopes his mother will return but he doesn’t know if his mom is still alive. Black Spider asked the customers at the teahouse if Yulang’s father has become the new sect leader. The customers said the set members is gathering in Emei Mountain and be ready to help Yulang’s father being the new sect leader. 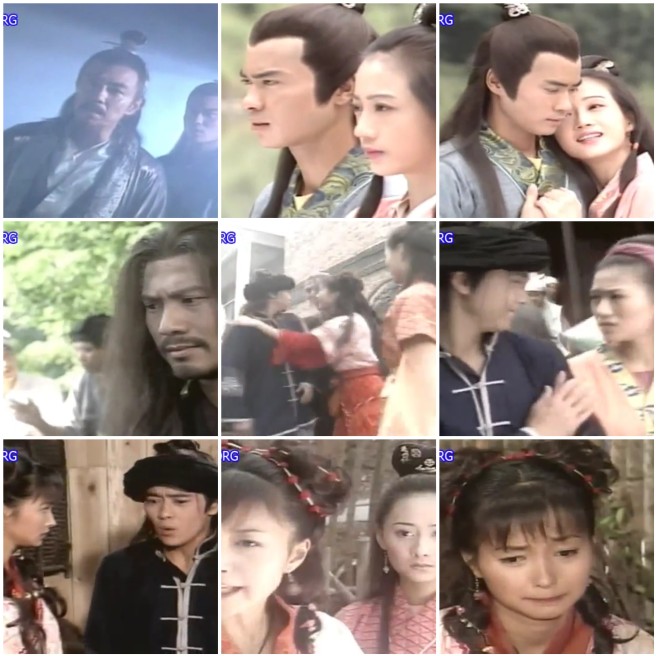 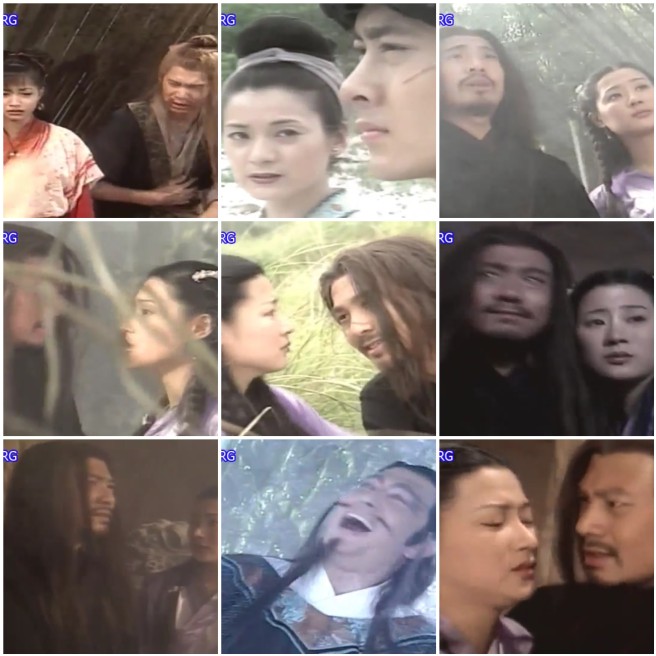 Hope you guys have a great day! I drew a Sweet and Dessert Land using adobe illustrator! 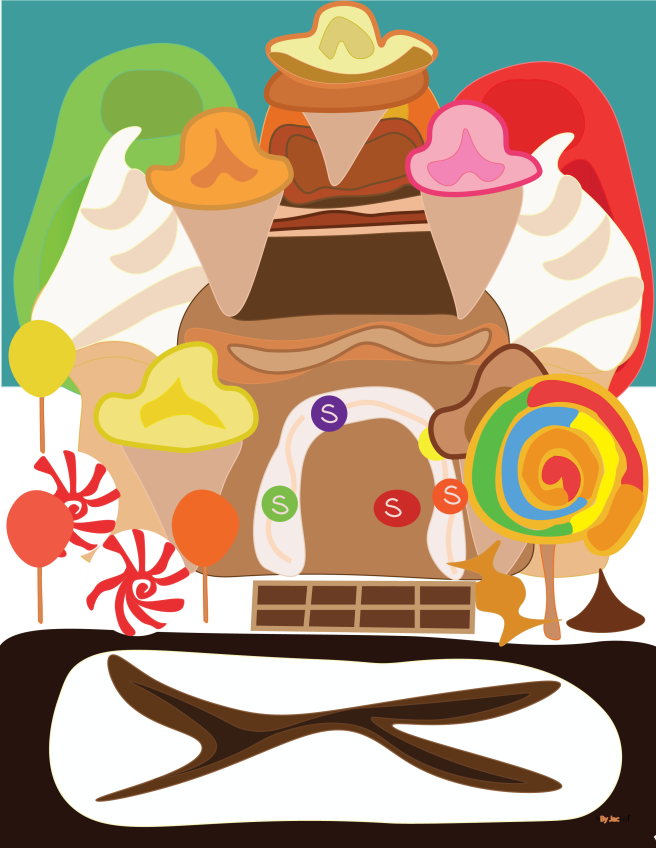 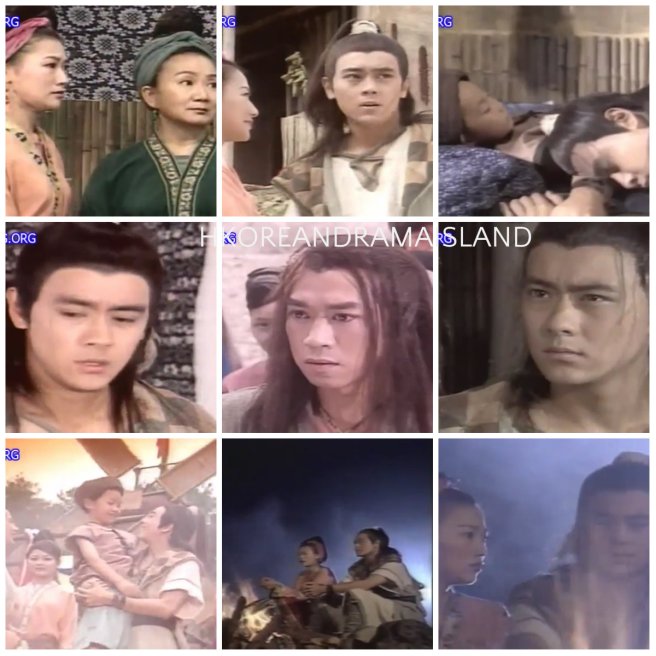 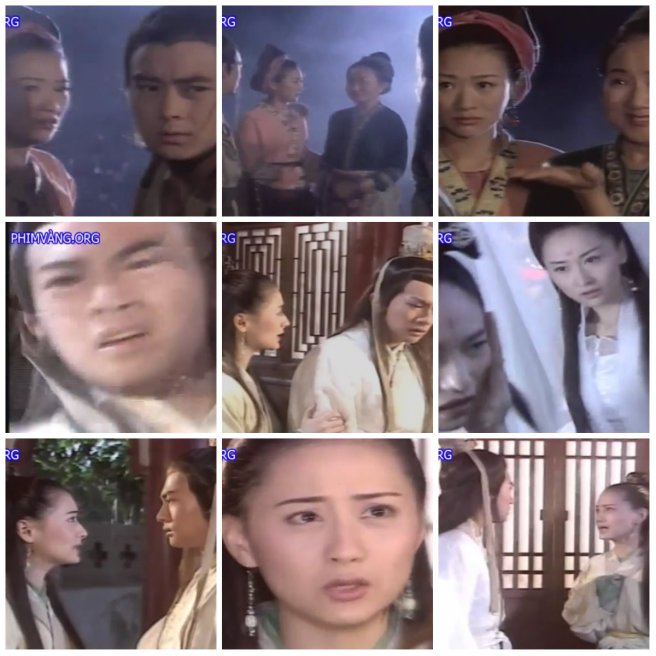 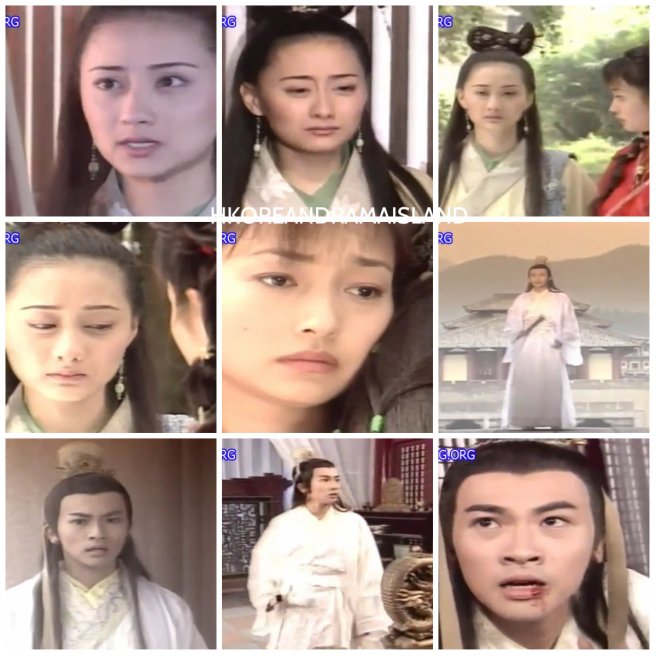 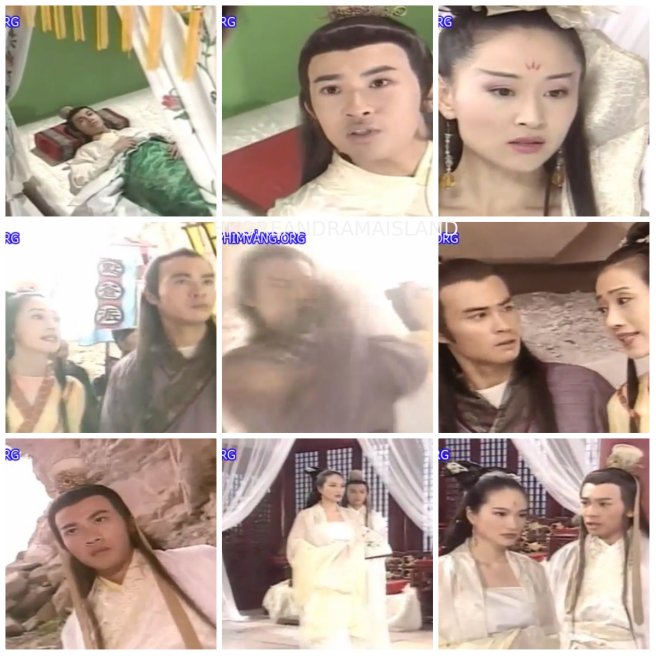 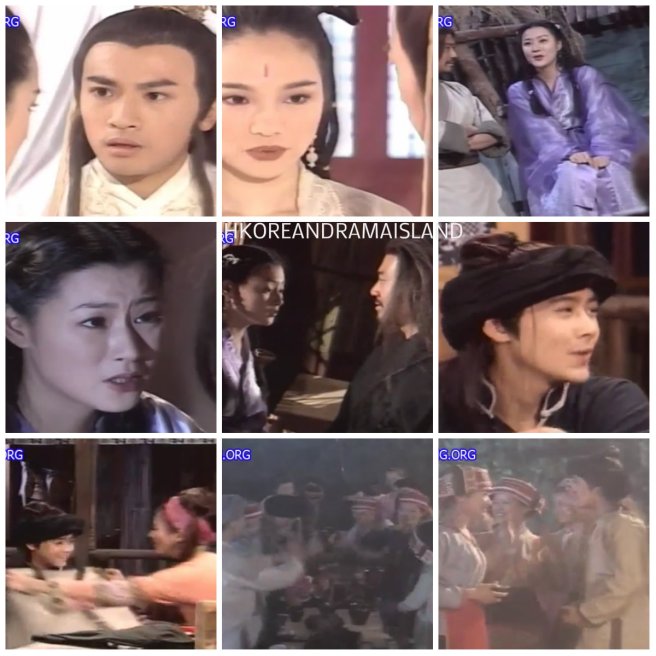