During the night, the lady sneaked out of the house. The villager eavesdrop the lady talking to her sister. Her sister told her to kill the villager but she hesiated. The lady put some powder on the cup of water and told the villager to drink it. The villager drink it and pour down the water. The villager fainted. The lady carved out the map while crying. The lady put down the knife. The villager wakes up and asked her why did she do it. The villager asked the lady when they first met, was it a setup. The lady said she was a spy to find the map but she thought he didn’t have it. After he became the leader of the tribe, he has the map carved on his back. After he has the map on his back, she didn’t think of betraying him anymore because she loves him. Her master wants to control her so she gave her a poisonous pill that she has to drink it every year or she’ll die. She loves him so she doesn’t care about death. She wants to follow him. She never thought of stealing the map for the medicine. The villager was about to leave. The lady gave birth to her son. The villager gave his son the name Lip Kong Tin. The monk suggests the sect member to spare the villager after they take back the treasure. The monk sit and wait for the villager and asked him if he remembered the gold shirt’s he’s wearing is when he first met him and saved him so he just want to chat with him as a friend. The priests told the monks that the monk is in danger. The priests fought with the lady. The lady threw needles and the priests died. The priest came to ward the lady. 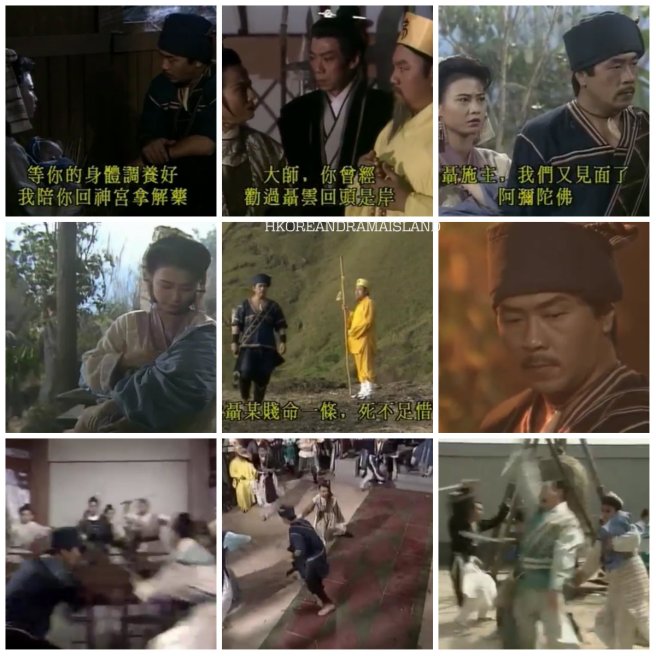 Lin Tin made a grave for the villager and put the map in Kong Tin’s body. Lin Tin came to the tribe and saw the villages dead. Lin Tin fought with Cook Yan’s sect. Cook Yan threw the jade out of his sedan chair. Lin Tin remembered that his major flaws were he couldn’t forget his past. Lin Tin burned the jade and looked for a doctor to heal Kong Tin. Kong Tin grew up with the doctor and farm.

Twenty five years ago, on the way on the road the priest found a guy who fainted. The guy said he got robbed. The priest bowed in front of the mountain. The lady took care of him. The priest did a ceremony and died. The lady asked her brother if someday she dies what would he do A villager said the village been assassinated. The lady told her brother she finds someone very suspicious.The villagers came into the uncle’s tent and asked him. The uncle pretends to injured his leg and used his sword and stabbed the villager. The uncle and the mask guy fought with the villager and bomb exploded and they left.

The masked sect burned the village and fought with the villager. The masked sect leader said he wants his map. Cook Yan, the leader of the sect came out from his sedan chair and deals with the villager to give him the map unless he tells him why does he want it. Cook Yan said the map contains a huge secret. The masked members was about to carve out the map from the villager’s back but Cook Yan has another idea of letting him use his martial arts to lead him to take the treasure from the temple. Cook Yan gives him four months to go with him or else he will kill his members. Cook Yan told the mute guy that if he carved the map out of the martial artist’s back he will suicide. Rather than doing that, he rather uses him to steal the treasure from the temple. The treasure is related to a big secret. It will be good if the martial artist found the treasure, but if someone discover the map on his back, the other sect with fight each other. Then he will use the chance to rule the world.