Gongmin plans to discard the slaves contract. Gongmin uses his Goryeo seal and gave an order to reinstate Choi Young for saving Princess No Gook’s life and for protecting him. Gongmin told Choi Young he gave him a higher position as Ho Gun but. Gongmin said he can banish him because he’s the king but he wants him to stay by him. Court Lady Choi told Choi Young that Eun Soo is getting married to Deuk Heung.

Faith wallpaper created by my cousin Michael to me. He asked me to choose a drama to make a wallpaper, I gave him “Faith.” Now I will patiently wait Blogger Heisui and Drunken Sword banner and wallpaper to me. If you want to gift me a wallpaper, send me a message on twitter or on here. 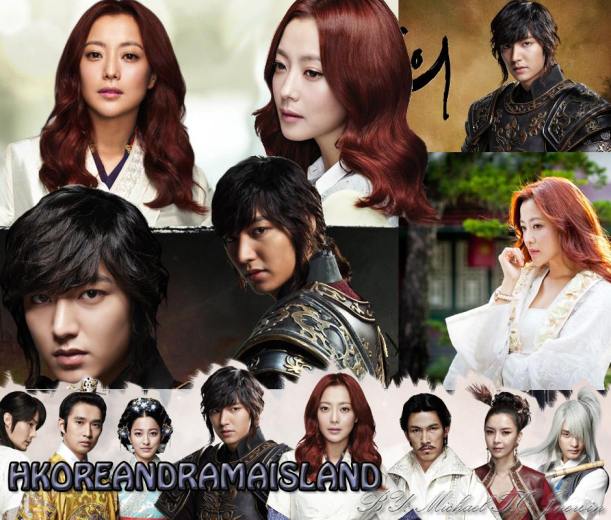 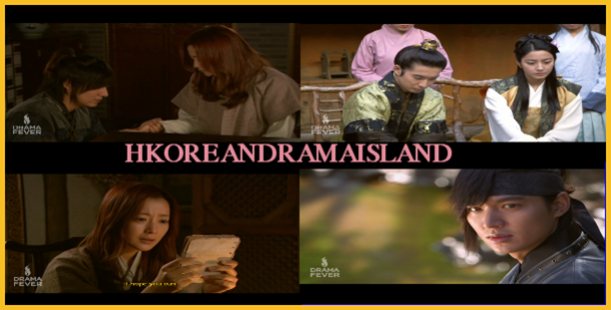 Choi Young told Ji Oh to tell the king and queen and the Wul Dal Chi to escape the palace for now. Choi Young told Deuk Heung he is only thinking about saving the palace now since he knows that Deuk Heung woud give the antidote cause if Eun Soo dies he dies. Wul Dal Chi fought with the rebels. Choi Young kills the guards and leads Princess Nogook on the way out. Deuk Heung asked the magistrate to side with him to kill Ki Cheol and dethrone the king. Deuk Hung killed the magistrate for rebelling against the king. Deuk Hung deals with Ki Cheol that he will be the king while Ki Cheol will have Eun Soo. Eun Soo told Choi Young she has to see Ki Cheol to see the last page. Choi Young won’t let Eun Soo see Ki Cheol. Choi Young plans to gather the troop and demand Deuk Heung for the antidote and gather the information. Gongmin signed teo the Wu Dal Chi that he’s the king of Goryeo but no one knows who he is. Deuk Heung saw Eun Soo’s book in the case.

Ki Cheol gave Deuk Heung a letter. Deuk Heung claimed that Gongmin has given the throne to him. The magistrate looked at the letter and said that Gongmin said he will not used the seal of Yuan but the letter has that seal. As Eum Ja and Hwa Soo came toward the king’s hiding place, Dae Man distracted them. Gongmin told Choi Young he doesn’t have to make him return to the palace so fast cause they won’t have a chance to have a casual talk like this. Eun Soo leaned on Choi Young and said if he has that attitude in heaven, everyone will be mad at him.

Eun Soo went back to Ki Cheol’s house and said she found out that date that the door will open. Eun Soo asked Ki Cheol if he wants to go back with her to heavne. Eun Soo told Ki Cheol that the book he showed her was only the front part. Eun Soo asked if there’s another part of the book.

Gong Min and Princess Nogook act as fortune tellers and predict the citizens’ future. Gongmin drew a pretty face picture for a girl and said if anyone calls her ugly, she can show this painting. Choi Young asked two elders to make a new seal of Goryeo for the king. Eun Soo looked at the second notebook and recognized her handwriting but she couldn’t remember that she wrote it. Eun Soo told Jang Bin she drew a line with Choi Young because she knows she will miss him but he’s always there for her. Eun Soo read the letter that she can’t let him leave and she has to prevent him from falling on the trap. 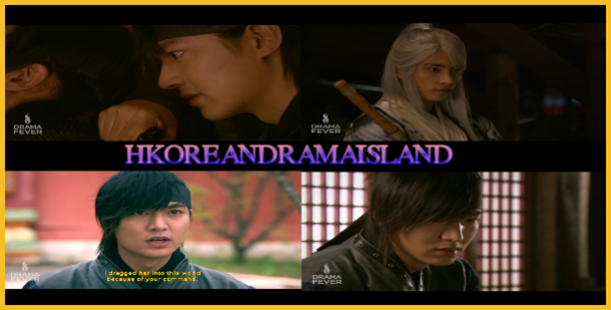 Princess No Gook asked Gongmin if he can tell her what Choi Young exactly said. Gong Min said that Choi Young told him that he brought Eun Soo into this world under his order so Gongmin must give him the seal to save her. Gong Min told the princess that the seal was given by the King of Yuan and he didn’t want to give it away. Gong Min sighed that the only person he knows is Choi Young and he asked his men to arrest him. Eun Soo dreamed of hugging Choi Young in the prison before he dies. Choi Young told Court Lady Choi he will come back after he sends Eun Soo to heaven. Eun Soo asked Choi Young to sit by her so she can lean on him. Eun Soo told Choi Young she found out the date she will return to heaven. Eun Soo said if she doesn’t go back by that date she has to wait another sixty seven years.

Ki Cheol told Gongmin that losing the seal means he isn’t qualified to be a good king. Gongmin said he got rid of the seal to make his own seal under Goryeo instead of Yuan. Deuk Heung told a retainer that Ki Cheol will have a war, and he needs to get rid of him so he can be king. Choi Young pours in medicine for Eun Soo. Eun said she dreamed that she saw another last page in the notebook. Deuk Heung asked Choi Young to play chess with him and said there was a man who couldn’t be saved by not having the antidote. 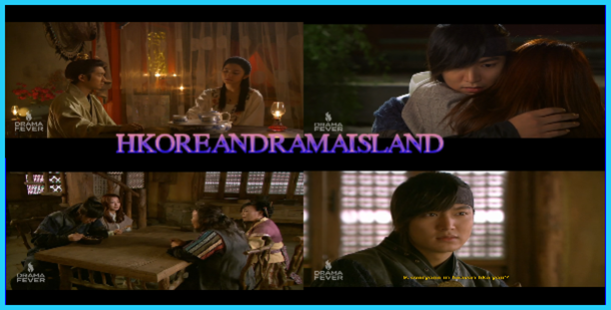 Choi Young denies of receiving the money and awaits for the king’s decision. A magistrate told Choi Young he’s under arrest and can’t walk out of the palace. The magistrate told GongMin he set up the 500 Nyang to get rid of the rumor of Choi Young controlling the king. Court Lady Choi managed to arrest the female assassin. Court Lady Choi told GongMin that the assassin only talked about the seal. Eun Soo told Choi Young she found out that the numbers at the end of the page in the notebook is a date. Ki Cheol asked the magistrate to choose which king he wants to side with. The magistrate asked Eun Soo if GongMin is a good king. Choi Young told Eun Soo to leave cause if the magistrate finds her helpful he might uses her. Eun Soo told the princess that there are many kings and queens but there’s no one that loved each other as much as GongMin and her. Gongmin told the magistrate that Choi Young killed the traitors for him. Choi Young admits to the king he did take brides. Choi Young apologized to GongMin for disappointing him. The king allowed Choi Young to be punished by three years of hard labor. GongMin sighed to the princess that he promised himself not to have Choi Young being arrested again.The princess told GongMin that Eun Soo came to bid her farewell. 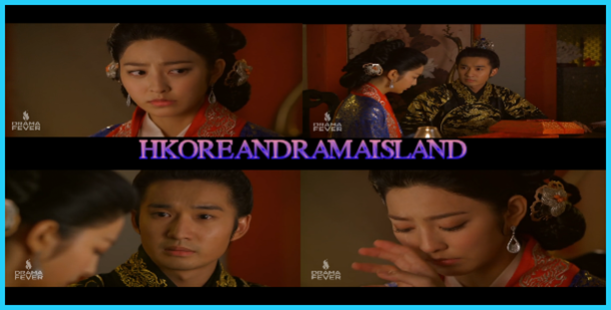 Eun Soo gave boxes of toothpaste to the soldiers. Eun Soo put on the medicine for Choi Young. Ki Cheol hopes that Deuk Heung can persuade Eun Soo to get back to him. It was funny when Eun Soo showed the tea has vitamin C and the people asked her what it is. Eun Soo told Choi Young she decided to sell soap for money. The elderly couple stared at Choi Young and Eun Soo. Choi Young confronted Eun Soo about not telling him about meeting Deuk Heung. Choi Young stared at Eum Ja and Hwa Soo.

Court Lady Choi wrote a letter saying that Ki Cheol brought Deuk Heung to cause trouble for the king. Deuk Heung asked Ki Cheol if he asked him to come because he doesn’t like Gong Min. The princess told GongMin she can ask her family to help him. GongMin gave the princess the piece of clothe and said he has his principle of helping his people. He broke his principle by marrying her the princess of Yuan. GongMin asked the princess if she would be willing to help him by not breaking his principle anymore. King GongMin removed some of his traitors from their positions. Deuk Heung came up to GongMin and hope he be his man.

GongMin asked Choi Young if he gives Eun Soo to Ki Cheol,would all his problems be solved? GongMin said if he does that, Choi Young wouldn’t want to serve him anymore. Eun Soo had a nightmare that she stabbed choi Young. Dae Man distracted Eum Ja. Choi Young told Hwa Soo to stop seeing Eun Soo since she’s scared of her. Choi Young asked Deuk Heung to give back the book to Eun Soo and discuss with her about the path to go to heaven then the king will be nice to him. Choi Young asked Deuk Heung to be nice to Eun Soo. Choi Young teach Eun Soo how to use a knife. Deuk Heung visits Eun Soo and gave her the notebook. The magistrates and Ki Cheol confronted Choi Young about the not about receiving five hundred Nyangs.

Eun Soo put on bandages on Choi Young’s left hand. Eun Soo rubbed Choi Young’s right hand. Choi Young told Eun Soo he will not risk his life easily in the future. He asked her not to cry. Ki Cheol washes himself in the bath and recalled how Eun Soo told him she knows how he’s going to die. Eun Soo told Choi Young that she wants to get her notebook back but if they can make the king strong enough to have the power to ask Ki Cheol to return the book. Eun Soo asked Choi Young to handshake with her promising each other that they will tell where they went. Dae Man and his friend happily peeked at Choi Young and Eun Soo.

Ki Cheol came up to Eun Soo but the queen came and asked Ki Cheol how can he arrive freely in the palace. Gongmin asked Ki Cheol why did he come here. Ki Cheol told Gongmin that his sister sent him a letter asking him if he needs a better king. A magistrate told the queen he makes love with his wife when he’s depressed. The queen got upset and left. Choi Young killed some people and said Eun Soo is living a different life from them. Deuk Heung came up to Eun Soo. Deuk Heung gave Eun Soo a book. Choi Young got injured.