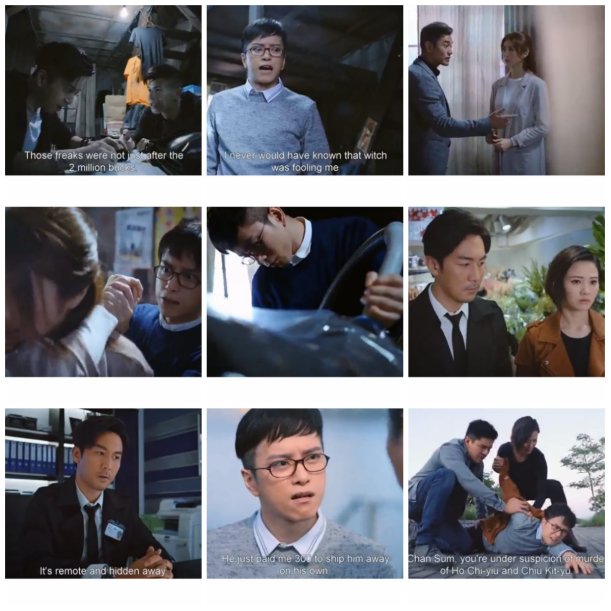 Lee Oi Lam visited Prawn Cracker and said despite what happened he’s still the one she cares the most. Prawn Cracker saw the necklace. She apologized and said it’s from her husband. Oil Lam said she thought he turned a new leaf so she returned to invite him to dinner but why did he went back in prison. Prawn Cracker said he came back to revenge for Wild Boar. Oi Lam said Wild Boar should have been dead long ago, he even had an eye on her. He drank and got her pregnant. Her dad took her to Canada but she found out she can’t have a baby again. He only cares for his own gain.

Kwok Sir searched for a good music school for Ko Ching and asked Man Ka Hei for help. Kwok Sir thought of he used to watch the typhoon and caused his brother to be dead.

Monique drinks with Master Yu. Master Yu requested Monique three hundred grand to fly on a private jet with her. Monique threw the gown at him. She cried and sat on the stairs and called Cotton. Monique leaned on Cotton and glad he was there. Someone called Cotton and told him to check the clip she she sent him. Monique wakes up and is behind him.

The forensics did an inspection on the body and found bruises on the neck and signs of arm being strangled to dead. The blood is A plus. The person put the victim in the nylon bag and threw him in the sea. A man came in the station and told Kwok Sir to look for his daughter Chiu Kit Yu. Kwok Sir suspects she is the person being murdered at the pier. Chris followed Miss Ying in her covered face and interviewed her. Ko Ching came and showed her badge to arrest Miss Ying. 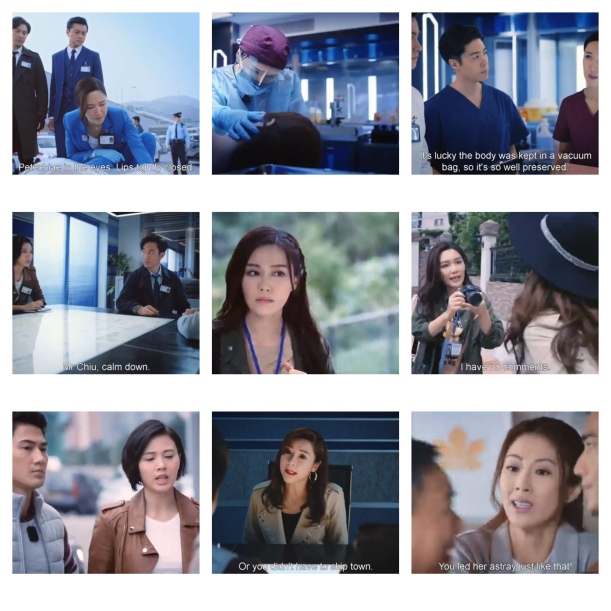 Shui Wai Ming and Monique ate with Elaine and saw a text from her ex Ricky and they advised her to take time finding the right guy. Cotton and Monique walked in the beach. Monique dreamed one day they will open their own winery. Flashbacks of Cotton made a wish of him and his two sisters will never fall apart. Chris had a nightmare of searching for her brother.

Kwok Sir showed a piece of diamond to Chiu Kit Yu’s father he found in Kelvin’s stomach and asked him if he recognizes it. He recognized the diamond were stolen goods from the clowns. In the tech diagram,  Cotton recognized the piece on Kelvin’s forehead as a locking clip on Chan Sum’s bottle. The cops and forensics assumed Chan Sum killed Kelvin to revenge for Wild Boar. The real murder of Kelvin is Prawn Cracker.

The forensics found out the vessel’s name is Scarlett. Kwok Sir visited Miss Yin and said Chu Hoi Chuen killed her father is one of the robbers who killed her father eight years ago so he believed she is related to the murder. Kelvin let Kwok Sir search the yatch. Kwok Sir asked Miss Yin did he sailed his yatch last night. Kelvin told Kwok Sir that he and Miss Yin went on the afternoon tea on the 12th of October. Shui Wai Ming found a piece of glass and saw blood stains. Cotton found a lavender broken nail.

Miss Ying complained to Kelvin about being followed by reporters. Kelvin is frustrated about not being able to pay his debt. Kelvin said he didn’t have a choice, Wild Boar saw him sailing and sworn if he didn’t pay his debt he will kill him so he had no choice. Miss Ying told Kelvin he dared to kill Wild Boar but didn’t dare to cut him and throw him in the sea. Kelvin left and told Miss Ying they will go their separate ways. 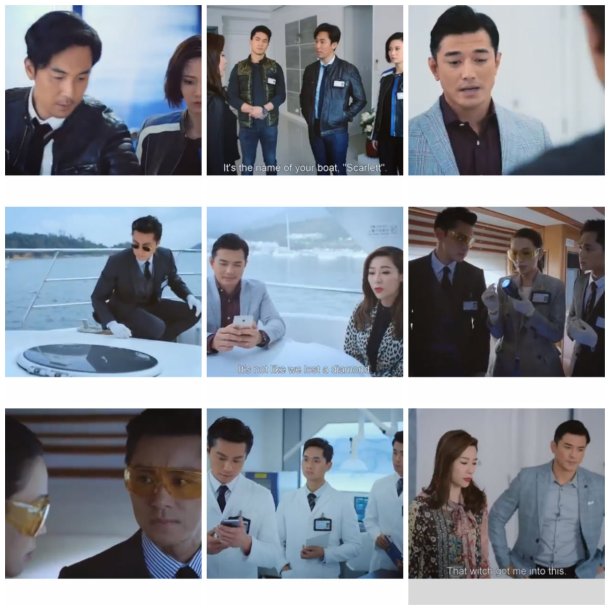 Cotton saw his friend Chan Sum working in a flower shop. Kwok Sir went in Chris’s room and saw a picture she took of Miss Ying. Chris sent the photo of Miss Ying having a lavender nail to Kwok Sir. Man Ka Hei told Sis Chau if she’s sick she feel hurt too. Sis Chau told Man Ka Hei she’s afraid she will leave her, she has brain cancer. Sis Chau said it’s all Miss Kiu said.  Man Ka Hei took Sis Chau to the doctor. Sis Chau whispered to Cotton that it wasn’t a brain tumor but her ear got clogged by an earwax.

Chris gave Charm Ting a sesame soup and would like to request Cotton for an interview. Chris came to the gym and interviewed Cotton. Cotton mentioned about his lost sister Ko Sin who got kidnapped.

Kwok Sir and Ko Ching researched that Kelvin and Miss Ying mentioned they took the pic in the both in October 12th but during that time the apps wasn’t released yet. Kelvin got into a lot of debt of the jewelry and coudln’t afford a boat. Kwok Sir and his team found a dead body. 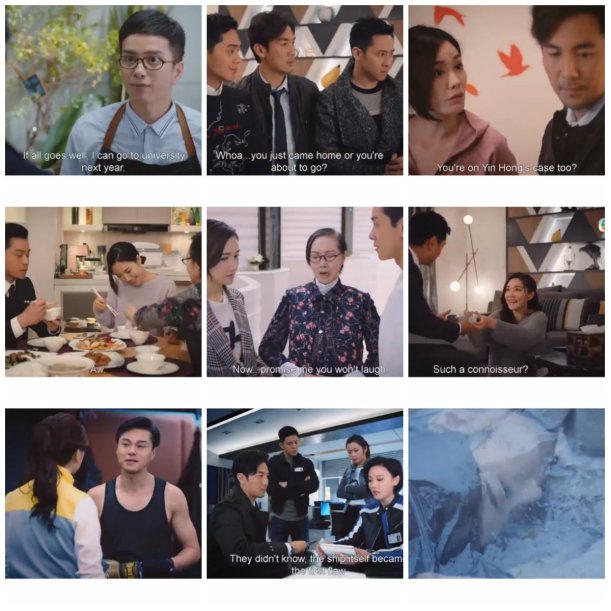 Cotton and his team did a lab test. Man Ka Hei confirmed the clown died five days ago. They couldn’t find any substances in the seawater so they guessed the victim was dumped in the seawater. Man Ka Hei told Cotton about there were signs of teeth broken, and he was either attacked by the back or being hunted. Flashbacks of Five clowns participated in a robbery. Wild Boar killed the other clowns and told Wo that that they were planning to kill and not rob and after that those clowns planned to kill them two also. Wild Boar tries to leave by the speedboat but got chased by the cops. He got shot five times and fell into the sea but his body was never found. Kwok Sir and Ko Ching asked Chan Sum  about if he kept in touch with Chu Koi Chuen and what does he thinks of Wild Boar’s death. 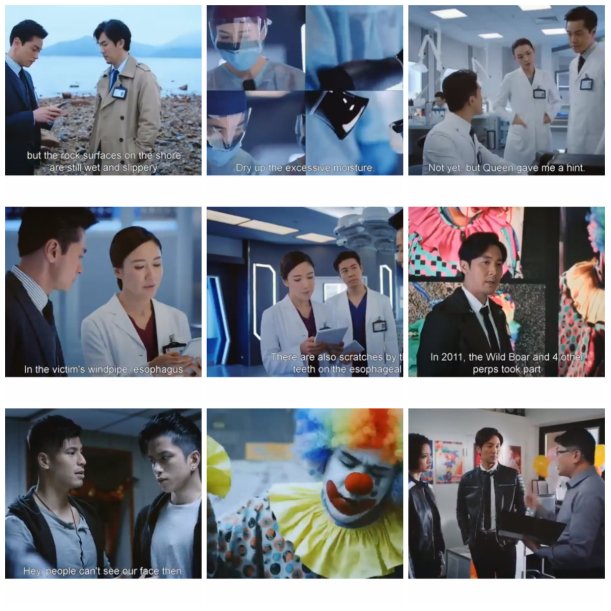 Monique opened the box of wine and looked at the bottle of wine that the french guy gave her. Cotton ate hotpot with Monique. They thought of their first time they met, the gang fight in the food stalls, Cotton grabbed Monique’s hand and ran. Sis Chau used Monique’s wine bottle to cook. Cotton showed Monique the wine text from Ko Ching. Monqiue told Cotton now she has him, she doesn’t need the wine. Chris searches for her long lost brother online and found out Cotton might be her lost brother. While Cotton boxes, he thought of his lost sister. Chris has a dream of the clown abducting her brother and the car crashed her mom. Chris sent Cotton a message she is interested in his forensic career and would like to interview him. Cotton rejected that he is not taking interviews. The forensics wore goggles and saw blood stains on the vessel.

At the station, Shuk Man sighed she isn’t pretty and her mother didn’t want her and she was about to suicide by the pier but she met Lung Ying Suet and she put her make up on turning her to turn pretty. Lung Ying Suet told Shuk Man so she attacked those who bully her. Lung Ying Suet told Shuk Man he has hurt her and she regrets taking her in the troupe. Ko Ching told Kwok Sir that Shuk Man probably spend the rest of her life in jail. Kwok Sir told her there is a harder punishment is that she has destroyed Ying Suet’s troupe.

Lung Ying Suet teaches the kids performing Chinese Operas. Lung Siu Ting told Lung Ying Suet he will use his fund to set up the troupe for her. He sold his house and will move to Canada. Chris followed Sis Hong and took photos of her yelling at her staff. Chris found an elderly man injured by the car and saw Sis Hong left. At the hospital, she heard a mother calling Cotton’s name and she looked at the boy. The forensics showed up at the crime scenes and saw the clown dead on the beach. Cotton research the dead of the three clowns.

In the ambulance car, Kwok Sir told Lung Ying Suet that lucky Shuk Man got striked by a fruit knife not a Japanese sword. Lung Ying Suet told Kwok Sir her answer is the same, she didn’t harm Cheung Shuk Man, she was trying to stop her from harming herself. Sis told Ko Ching that Shuk Man used to be in depression but luckily Ying Suet was there helping her standing back up. Shuk Man always listen to what Ying Suet said. Shuk Man woke up and Kwok Sir’s subordinate asked her if Ying Suet hurt her. Kwok Sir received a call from his subordinate that Shuk Man tripped from the spear by mistake. Man Ka Hei came and did an inspection on Shuk Man’s body and told her if Ying Suet didn’t do anything she will be fine.

Kwok Sir’s colleagues dropped chips on the floor in their apt. Kwok Sir told them if they keep on making a mess, he will charge them. Chris rung the bell and introduced herself as their new tenant. Charm Ting and his friend asked Chris a question about Manchester soccer team and high five her for liking soccer. Kwok Sir complained that the new tenant isn’t a girl. Chris gave some money to Charm Ting and his friends to buy some chips. As Kwok Sir ask her about the room, she told him that she will do some work then let him join in the game.

Ko Ching teased Cotton and asked him to tell her more about Chris. Chris left a bag in the taxi.  The taxi driver drove. Chris jumped into the taix. Cotton showed his id. The taxi driver assumes he’s a cop and  walked out.  Chris and the taxi driver argue. Cotton vouched for Chris the cops took the taxi driver in the station. While working out, Man Ka Hei teased Cotton if she was him she would have talked to her and asked her to join them. Man Ka Hei teases Cotton about appreciating Chris and he helped her twice. Cotton’s girlfriend Monique introduced wine to a businessman. Ko Ching set up the white candles for a romantic night. Cotton blew the candles. 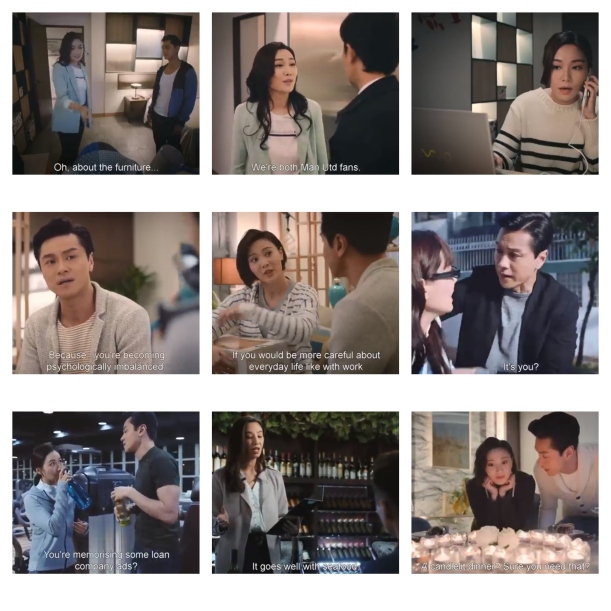 Here’s my first impression on the first two episodes I have viewed.

1. There’ a lot of cute guys for me to fangirl, Shaun Tam, Raymond Wong, and Fred Cheng.

2. The female leads are just side characters. Rebecca and Selena doesn’t do much in the series. All the focus in on Shaun Tam heading the team.

4.The cases doesn’t provide much evidences. All the evidences are being talked during the Forensic research then in the end the criminal gets arrested.

5. The series spend more time talking about the case during the Forensic research.

6. The tech being used is impressive.

7. The ending scene of the first two episodes scared me with the chain tied up and the tiger head.

8. I love seeing Raymond Wong and Selena Li together.